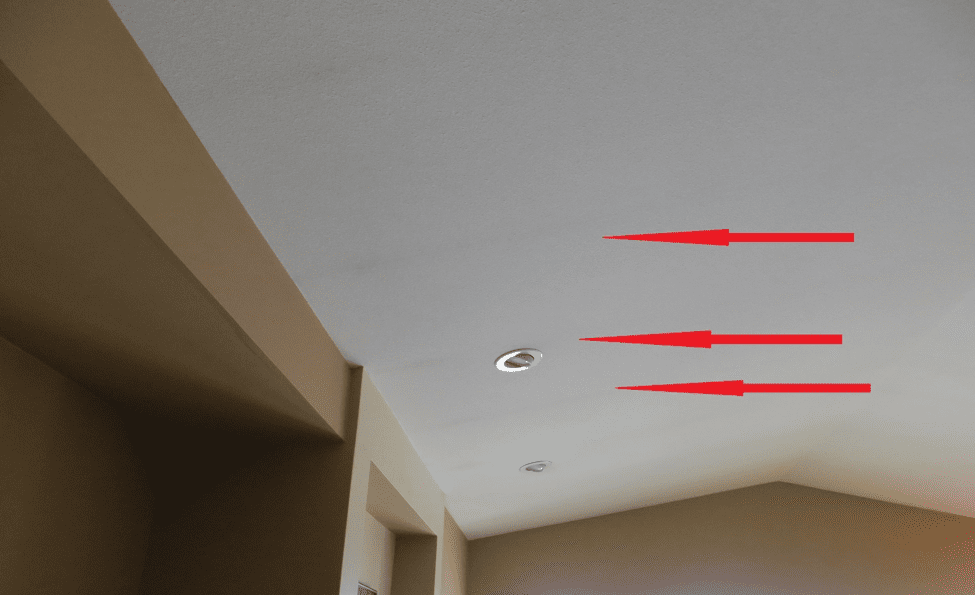 Ghosting: How it Can Darken Your Ceiling

What is Brownian Motion?

To understand how ghosting occurs, we must understand what causes the accumulation of particles in concentrated areas. The oldest known deposition mechanism will be described first - Brownian motion. A long dead English botanist (yes, botanist not physicist), R. Brown, noticed tiny particles behave much like molecules with respect to vibration. Under the kinetic theory of gases, molecular vibrations are directly related to temperature, meaning the higher the temperature, the greater the molecular vibration. Brown observed that tiny particles in fluids get jostled or bounced around depending on temperature. The higher the temperature, the greater the jostling or movement of the tiny particles. He believed that the vibration of the molecules in the fluid bounced the particles around. He was correct and became famous - hence the term Brownian motion. Okay, so far this is an interesting story, but...

How does this relate to our problem?

Well, air is a fluid and particles in air get jostled around based on the temperature of the air. When air, with all of these bouncing particles, brushes against the interior of an exterior wall, it gets cooled. Not all of the air gets cooled, only the air right against the interior surface of the exterior wall, we call this layer of air the boundary layer. Now it gets a little bit complicated. Not all of the air in this boundary layer cools at the same rate. Some spots are colder than others. Where there is higher heat loss such as at a wood framing member, say a 2x4 beam or stud, the air in the boundary layer right at this spot is colder than the air in the boundary layer just inches away. Well, the air doesn't bounce around as much in these cold spots, which means the tiny particles in the air at these cold spots also doesn’t bounce around very much. If the particles are not bouncing around very energetically, it is easier for them to get stuck to the surface of the wall - now you see the dark spots known as "ghosting". The particles in the air next to the wall tend to "plate out" on colder surfaces. Since every stud is a "thermal bridge" the outlines of the studs can sometimes be seen due to the accumulation of tiny particles at the cold spots. This is often called ghosting and was very common in the old days, before MTV, even before Ozzie and Harriet. It was common back then because we typically had poorly insulated walls (real cold spots) and lots of people that smoked indoors. The smokers supplied the particulates, then the tobacco particulates plated out on the cold spots, usually at the studs due to Brownian motion.

Why doesn't this particular phenomenon, ghosting, happen as much today?

Two reasons: our houses are better insulated, and there are fewer smokers. Fewer people smoke inside, and those that do typically accept the fact that smoking not only causes their house to smell but smoking also makes their house dirtier due to the tobacco particles plating out on cold surfaces. We point this out since many units we inspect contain heavy smokers and the problems in those units are usually due to tobacco particulates. Don't smoke inside and your white walls won't go brown, nor will your light-colored carpets discolor – the same goes for your blinds. You must accept the consequences when you live in an ashtray.

Give us a call to get your home inspected for asbestos, mold, and other particulates that may be present in the air.

Helping you protect your investment is something C4U Inspections is passionate about. Proudly serving the Okanagan for over a decade, we are happy to assess your residential, commercial or strata development with quality home inspection services. Contact us for your home inspection today. Call (250) 212-4025

Serving the Okanagan Since 2005

Let c4u see for you